iRHOM2 is a critical pathogenic mediator of inflammatory arthritis

iRHOM2 is a critical pathogenic mediator of inflammatory arthritis

iRHOM2, encoded by the gene , regulates the maturation of the TNF-α convertase (TACE), which controls shedding of TNF-α and its biological activity in vivo. TACE is a potential target to treat TNF-α–dependent diseases, such as rheumatoid arthritis, but there are concerns about potential side effects, because TACE also protects the skin and intestinal barrier by activating EGFR signaling. Here we report that inactivation of allows tissue-specific regulation of TACE by selectively preventing its maturation in immune cells, without affecting its homeostatic functions in other tissues. The related iRHOM1, which is widely expressed, except in hematopoietic cells, supported TACE maturation and shedding of the EGFR ligand TGF-α in -deficient cells. Remarkably, mice lacking were protected from K/BxN inflammatory arthritis to the same extent as mice lacking TACE in myeloid cells or -deficient mice. In probing the underlying mechanism, we found that two main drivers of K/BxN arthritis, complement C5a and immune complexes, stimulated iRHOM2/TACE-dependent shedding of TNF-α in mouse and human cells. These data demonstrate that iRHOM2 and myeloid-expressed TACE play a critical role in inflammatory arthritis and indicate that iRHOM2 is a potential therapeutic target for selective inactivation of TACE in myeloid cells. 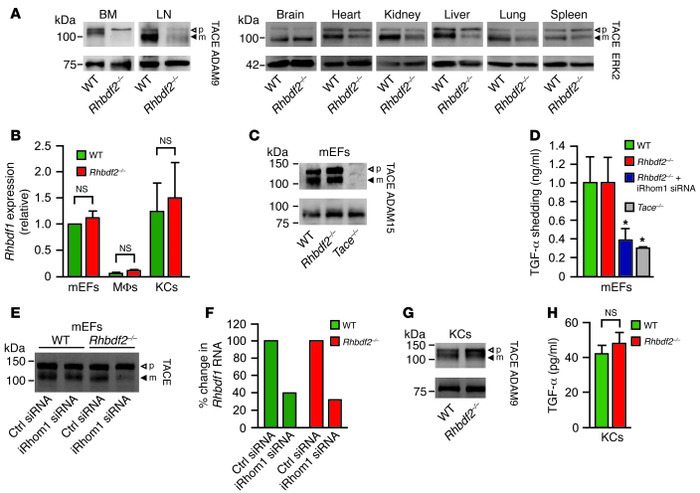