DCs and macrophages both express the chemokine receptor CX3CR1. Here we demonstrate that its ligand, CX3CL1, is highly expressed in the murine kidney and intestine. CX3CR1 deficiency markedly reduced DC numbers in the healthy and inflamed kidney cortex, and to a lesser degree in the kidney medulla and intestine, but not in other organs. CX3CR1 also promoted influx of DC precursors in crescentic glomerulonephritis, a DC-dependent aggressive type of nephritis. Disease severity was strongly attenuated in CX3CR1-deficient mice. Primarily CX3CR1-dependent DCs in the kidney cortex processed antigen for the intrarenal stimulation of T helper cells, a function important for glomerulonephritis progression. In contrast, medullary DCs played a specialized role in inducing innate immunity against bacterial pyelonephritis by recruiting neutrophils through rapid chemokine production. CX3CR1 deficiency had little effect on the immune defense against pyelonephritis, as medullary DCs were less CX3CR1 dependent than cortical DCs and because recruited neutrophils produced chemokines to compensate for the DC paucity. These findings demonstrate that cortical and medullary DCs play specialized roles in their respective kidney compartments. We identify CX3CR1 as a potential therapeutic target in glomerulonephritis that may involve fewer adverse side effects, such as impaired anti-infectious defense or compromised DC functions in other organs.

Cortical, but not medullary, DCs can stimulate Th cells in GN. 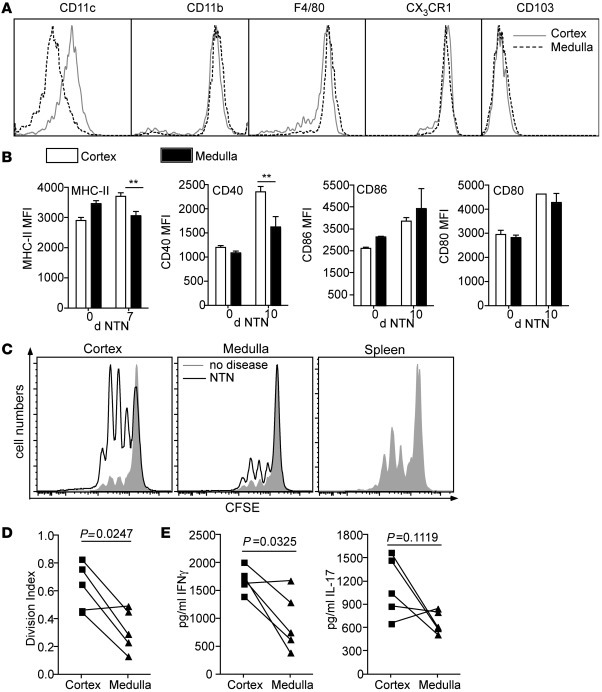