The regulatory roles of long noncoding RNAs (lncRNAs) in transcriptional coactivators are still largely unknown. Here, we have shown that the peroxisome proliferator–activated receptor γ (PPARγ) coactivator α (PGC-1α, encoded by ) is functionally regulated by the lncRNA taurine-upregulated gene 1 (). Further, we have described a role for in the regulation of mitochondrial function in podocytes. Using a murine model of diabetic nephropathy (DN), we performed an unbiased RNA-sequencing (RNA-seq) analysis of kidney glomeruli and identified as a differentially expressed lncRNA in the diabetic milieu. Podocyte-specific overexpression (OE) of in diabetic mice improved the biochemical and histological features associated with DN. Unexpectedly, we found that OE rescued the expression of PGC-1α and its transcriptional targets. OE was also associated with improvements in mitochondrial bioenergetics in the podocytes of diabetic mice. Mechanistically, we found that the interaction between and PGC-1α promotes the binding of PGC-1α to its own promoter. We identified a -binding element (TBE) upstream of the gene and showed that binds with the TBE to enhance promoter activity. These findings indicate that a direct interaction between PGC-1α and modulates mitochondrial bioenergetics in podocytes in the diabetic milieu.

OE in podocytes protects against features of DN. 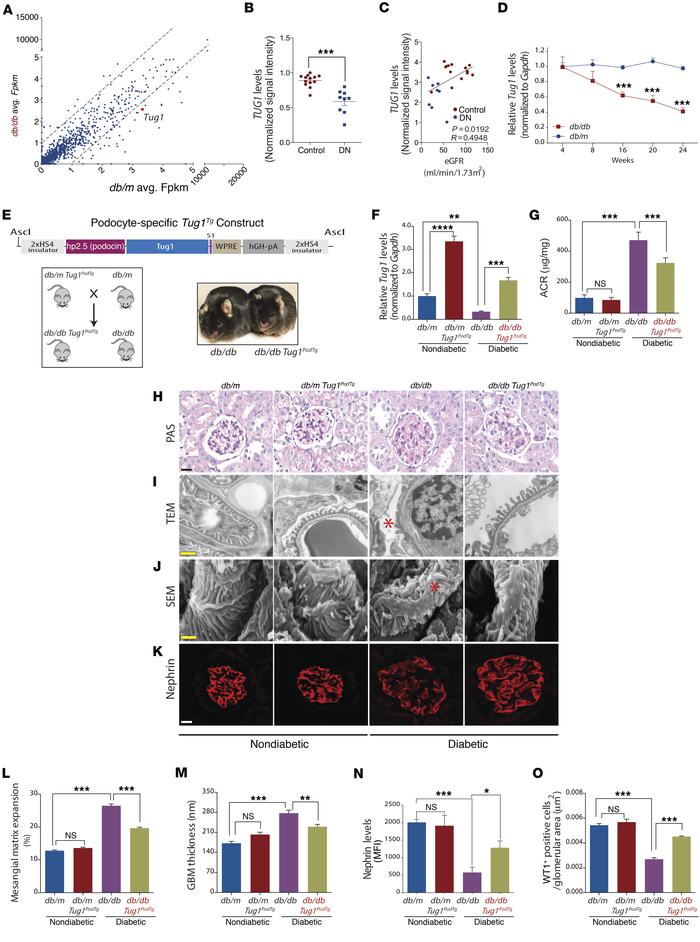