Breast cancer (BrCa) is the malignant tumor that most seriously threatens female health; however, the molecular mechanism underlying its progression remains unclear. Here, we found that conditional deletion of hypermethylated in cancer 1 (HIC1) in the mouse mammary gland might contribute to premalignant transformation in the early stage of tumor formation. Moreover, the chemokine (C-X-C motif) ligand 14 (CXCL14) secreted by HIC1-deleted BrCa cells bound to its cognate receptor GPR85 on mammary fibroblasts in the microenvironment and was responsible for activating these fibroblasts via the ERK1/2, Akt, and neddylation pathways, whereas the activated fibroblasts promoted BrCa progression via the induction of epithelial-mesenchymal transition (EMT) by the C-C chemokine ligand 17 (CCL17)/CC chemokine receptor 4 (CCR4) axis. Finally, we confirmed that the HIC1-CXCL14-CCL17 loop was associated with the malignant progression of BrCa. Therefore, the crosstalk between HIC1-deleted BrCa cells and mammary fibroblasts might play a critical role in BrCa development. Exploring the progression of BrCa from the perspective of microenvironment will be beneficial for identifying the potential prognostic markers of breast tumor and providing more effective treatment strategies.

GPR85 is a functional receptor for CXCL14 activity. 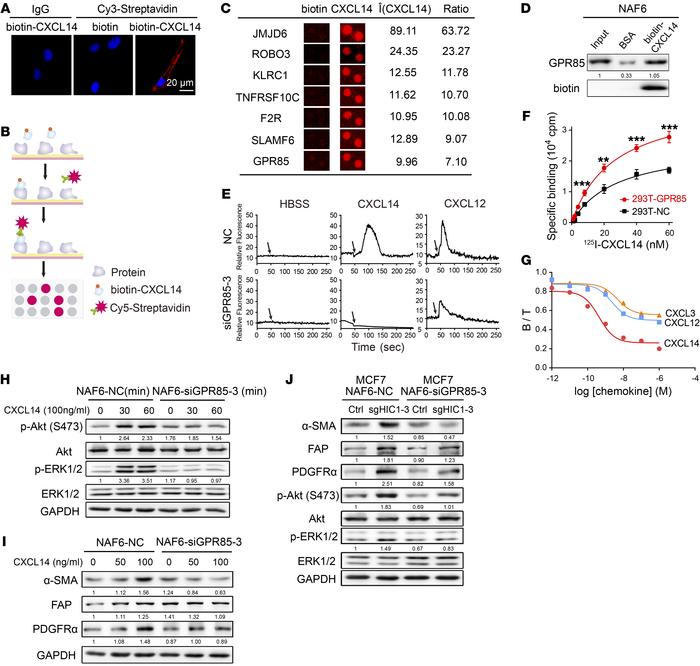